Six tips for dealing with a massive competitor 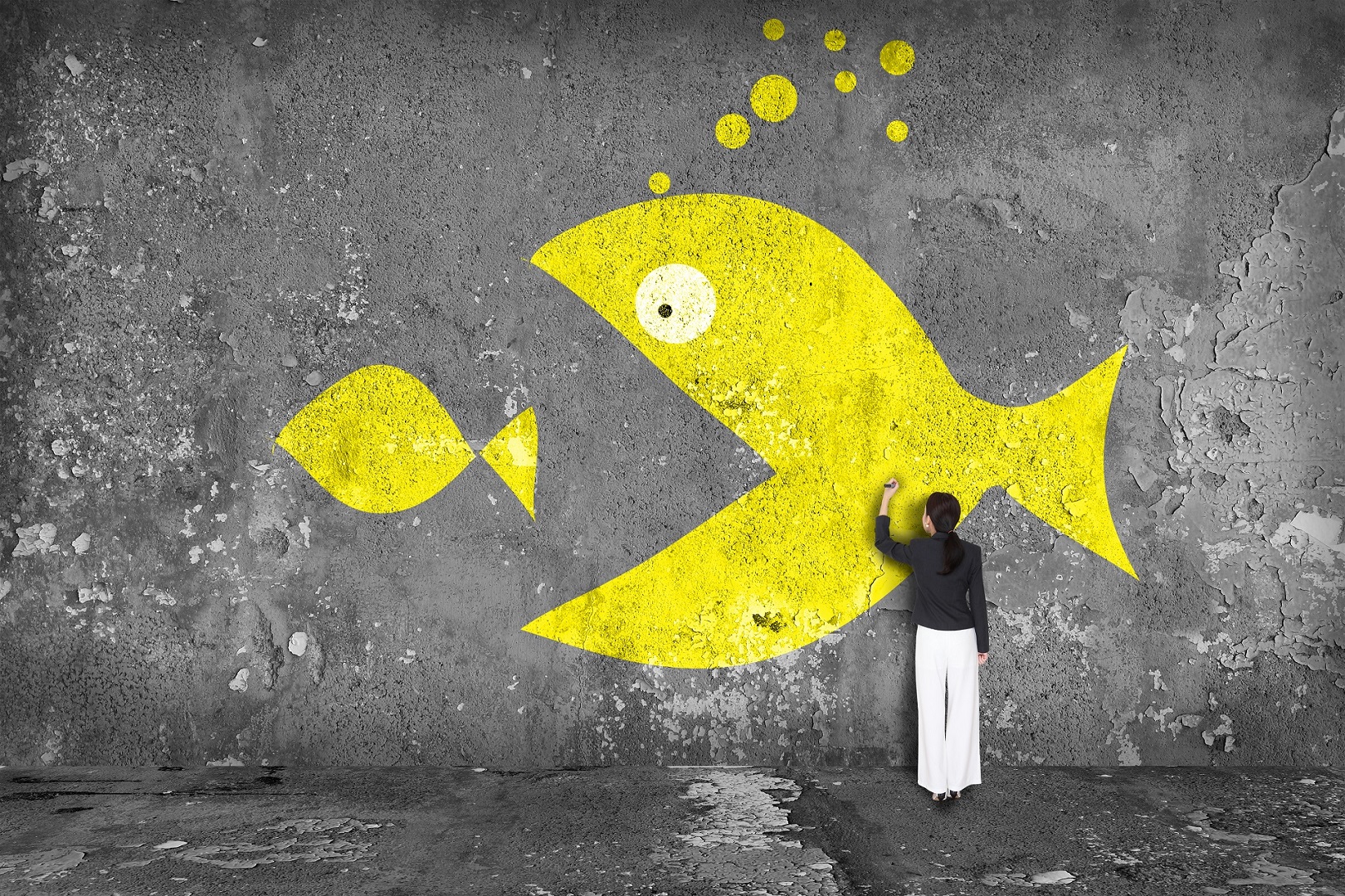 Is a big fish about to play in your pond?

So you’re about to be joined in the pond by a big fish, maybe even a gargantuan fish.

What do you do to make sure that the bigger fish doesn’t eat your breakfast, lunch, and dinner?

This week, mainstream media has been abuzz with speculation that Amazon is about to pull the trigger on a long-mooted move into the Australian market. In the event that it does, what would happen to the likes of JB Hi-Fi and Harvey Norman?

Suffice to say, those businesses may be getting a touch nervous about a company with a market cap of $387 billion coming into the relatively small pond that is the Australian market.

This isn’t just a game for the big boys, though, as it’s a story which has been repeated throughout the history of commerce.

We’ve heard it all before: a small shop goes out of business because a bigger store, selling the same thing at a lower price, opens up next door.

Sometimes the emergence of a cashed-up competitor can spur businesses to take a good, hard look at themselves and figure out what they do well, what they don’t do well, and how they can potentially scoop up a market the larger fish forgot about.

Bookstores have been playing at this game for a while now. A while ago they were all but proclaimed dead, but independent retailers who have provided quality customer service and a pleasurable shopping experience have stood the test of time, while chains have fallen by the wayside. (Coffee at Borders, anyone?)

Similarly, $80b coffee chain Starbucks tried and failed to make a substantial dent in the Australian market.

It turns out that the diversity and quality of existing cafes meant the big fish just couldn’t get a look in.

How does a business live to fight another day when threatened by a massive competitor?

It’s good advice in any situation, but especially applicable here.

It’s easy to start having sleepless nights when the big fish appears as a shadow in the water, but being panicked very rarely leads to a rational response.

You may be starting to think about the consequences of going out of business, and about the time and energy you’ve wasted.

Focus on what has gotten your business to this point, about the customers you have and about the relationships you’ve built in the market.

2. They weighed up their value proposition

This is where that calm thinking will come in handy.

Analyse your value proposition – not to you, but your customers. Why do your customers come back to you for your product or service?

Are you seen as experts in the field? Do you go the extra mile for customers? Is your product of high quality? Are you the cheapest in the category?

(Hint, if it’s the latter you may be in a bit of strife.)

It’s also time to look at what you don’t do so well and make a plan to lift your game.

3. They analysed the competition

Google is your friend here.

In the age of online reviews, there’s probably a flood of customer feedback available to you on the internet.

What do customers say about their service?

Get to know the opposition.

One of the advantages of being in a smaller business is that you’re more agile and can change your value proposition more quickly than the bigger player.

4. They didn’t try to compete on price

In about 99 percent of cases, you won’t win competing on price.

If the business coming into your patch is offering a cheaper price on the same or similar product or service, then it’s because their size has afforded them the opportunity to build scale.

You can’t stick with them if it comes down to a war of attrition.

It also paints your business as being at the whim of the larger competitor.

Instead, focus on the intangibles which have made your business a success to this point.

Things like customer service and relationships may not cost you much on a dollars and cents – but make the experience of shopping with you a pleasurable one.

You’re far more likely to compete well on these grounds rather than on price.

After all, a smile and helpful disposition doesn’t cost you anything.

5. They didn’t rubbish the competition

This is very, very tempting, but in the long run doesn’t really work.

As a larger business, it can more likely absorb any short-term hits you may be able to muster – but in the long game you just come off looking a bit frightened.

A cornered animal tends to lash out, and that’s the appearance you risk giving off if you start attacking your competitor outright.

6. They found a niche

In the worst case scenario, the competitor comes and eats your lunch by just being a better proposition for your customers.

Consider whether there’s a niche out there not being considered by the bigger fish.

Nobody can be everywhere at once, and there’s always a segment where their offering will be weaker than its core offering.

It’s time to get smart.

Identify the niche, and work out whether you can make a viable business out of servicing that niche.

There’s also the possibility that you could tweak your model to provide a greater level of product or service for a higher fee.

The number of customers willing to pay a premium may be fewer, but those interested in the greater level of service will be willing to pay if you solve a pain point for them.