If you’ve been hearing the words ‘good enough’ used a lot in your business lately, it’s an early sign that you’re headed for trouble. It’s also a big sign that your employees are lacking your vision and passion. They will ultimately, albeit subconsciously, work to destroy your company.

It may sound simplistic, even harsh. But the reality is that by allowing a culture that accepts mediocrity, you are willingly hurting your company’s profitability. For a business operating in a stable marketplace with less competition, you won’t see the effects for a while. For others, it will come much quicker. There are many reasons why ‘good enough’ really isn’t good enough and here are the reasons.

1. ‘Good enough’ is not good enough for your best employees

As a company, you risk creating a culture where mediocrity, poor performance and a ‘good enough’ attitude is the status quo. You’re no longer inspiring your staff to do their best work, but are encouraging them to produce substandard work that no one should be proud of.

Great employees are quick to spot this issue and leave. A lack of motivation is one of the top three reasons employees leave companies. The biggest motivation killer is not having their basic need fulfilled, which is to be proud of their work.

As your best employees leave, the pressure builds on those left behind who are willing to accept poor performance. This extra workload and pressure results in them having to make further compromises. Eventually, this vicious cycle erodes a company’s profitability. Without a drastic change, this will ultimately be the demise of a company.

If you’re producing poor products or providing a level of service that’s just ‘good enough’, you’re indirectly telling your customers that you don’t care about them. Who wants to work with or buy products from a company that is openly proud of producing crap? 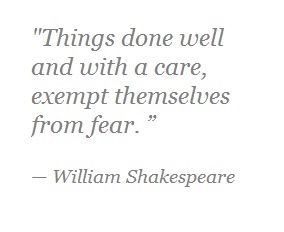 Think about Nokia and Apple during the global financial crisis. One was a mammoth on autopilot, churning out uninspiring and substandard products, while the other was producing products that had people camping out for days just to get their hands on them.

The former went from holding an 82% market share at their best, to less than 2% today. The latter went on to become the richest and largest company in the world. A culture of ‘good enough’ killed Nokia.

There is one emotion humans rarely handle well: guilt.

You may be asking how guilt can affect profitability. Trying to ease that guilty feeling and blaming yourself, even if subconsciously, will affect your ability to make the right decisions. This will cost you time and money.

Will deciding something is ‘good enough’ cause your business to inexplicably implode today? No. Will the endless pursuit of perfection guarantee success and profitability? Again, no.

However, every time you allow yourself to accept ‘good enough’ as an outcome, you’re telling yourself, your employees and importantly, your customers, that you no longer care.

If you don’t care, why should they?

How to become an Equal Opportunity Employer

4 tips for getting superannuation payments right in 2022